Bruno Goffé is a CNRS Emeritus Research Director. Researcher at CEREGE, Aix-Marseille University, he was, until 2013, in charge of the issue of geological resources at national level for the CNRS-INSU and co-host of the programming group of fossil and geothermal energies, and critical metals of the alliance for ANCRE energy. He was a Director of Earth Sciences at the national level from 2006 to 2011 as assistant Director of INSU. He is the author of more than 150 publications with peers-reviewed and 17 patent publications. Its main specialties are mineralogy, silicate, carbon, and fluid petrology – geology and geodynamics of mountain ranges and continental areas, – the durability of materials in geological environments, nuclear waste, CO2, drilling insulation cements, high-temperature resistant cements and low-pH cements, – high-pressure and high-temperature experiments.

Guy Libourel is a professor at Ecole Supérieure Nationale de Géologie de Nancy (Université de Lorraine) working in the Centre de Recherches Pétrographiques et Géochimiques (CRPG)research department. Guy uses experimental petrology to study the formation of the first solid phases in the Solar system (refractory inclusions and chondrules). He has also interest in anthropic materials (crystals, glasses, slags, ashes) and their long-term reactivity. Guy is a member of the executive board of ELEMENTS.

Javier Escartin is a CNRS director of research working in the Institut de Physique du Globe de Paris.Javier is also associate researcher at the Woods Hole Oceanographic Institution. His research is based on the formation and evolution of the oceanic lithosphere, with particular interest for active accretion processes at mid-ocean ridges. Javier also studies the rheology and experimental deformation of rocks in hydrothermal systems with hydrated phases such as serpentine and talc. 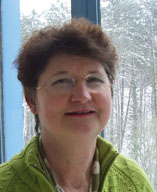 Maryse Ohnenstetter is a CNRS director of research working in the Centre de Recherches Pétrographiques et Géochimiques(Nancy) since 1995.After completion of her Ph.D. in 1975 and her habilitation in 1982 on the structure and petrology of ophiolites, Maryse joined the Centre de Recherches sur la Synthèse et la Chimie des Minérauxin Orléans together with being an external member of BRGM. Maryse has worked as secretary of the council of the International Mineralogical Association, first for a replacement in 2001 then permanently since 2002. Her research is focussed on the geology of mineral deposits in mafic and ultramafic rocks with expertise on mineralogy and petrology in these systems.

Anne-Marie is a CNRS director of research working in the Laboratoire de Géophysique Interne et Tectonophysique of Grenoble. Her research is based on fluid-rock interactions, and more precisely on mechanisms of deformation and fluid circulation in active fault zones, with implications for the seismic cycle. Her recent work mainly focussed on deformation and hydrothermal alteration of the Nojima fault (Kobe earthquake) and of the Chelungpu fault (Chi-Chi earthquake), through analysis of drill cores.

Anne-Line Auzende was awarded a Ph.D. by the University of Clermont-Ferrand in 2003. Anne-Line has worked on serpentine minerals in convergent settings, focussing on the microstructure and physical properties of serpentine minerals, with implications for the rheology of subduction zones. Anne-Line then used experimental petrology under extreme conditions during her post-doc at the Institut de Minéralogie, Physique des Matériaux et Cosmochimie(IMPMC, Paris), to better understand the composition and structure of the lower mantle. To do so, her approach focussed on studying the partitioning of elements between high-pressure phases. Anne-Line was appointed as a lecturer at University Paris Diderot, where she combines her research with teaching.

Sylvain Bernard is a CNRS researcher at the LMCM-MNHN. His objective is to deepen the understanding of the geological cycle of organic carbon on the basis of a multidisciplinary approach at the interface between geochemistry, mineralogy and paleontology. During his PhD thesis defended in 2008 at the Laboratoire de Géologie de l’Ecole normale supérieure (Paris), the use of advanced techniques of spectromicroscopy has made it possible to highlight the preservation of signatures of living organisms within rocks that have undergone intense metamorphism. At the same time, he laid the foundations for an experimental approach to the fossilization of organic molecules. In postdoctoral studies at GFZ-Potsdam, he was interested in the processes of degradation of organic molecules linked to the formation of hydrocarbons. Today, his research aims to answer this fundamental question: how do organic molecules and biominerals evolve under complicated geological history?

Alain CHEILLETZ is a professor at Ecole Supérieure Nationale de Géologie de Nancy (Université de Lorraine) working in the Centre de Recherches Pétrographiques et Géochimiques (CRPG) research department. Alain has been head of the section 35 of Conseil National des Universités from 2003 to 2007 and worked as project manager for natural resources at INSU-CNRS from 2008 to 2011. Alain is a geologist with expertise on mineral deposits. 40 years of geology made him work on tungsten, copper, lead, zinc and gold deposits throughout the world. Alain has led an international scientific research team devoted to studying emerald deposits, including famous resources in Colombia. His academic career benefited from three long-term stays in Haïti, in Ontario and in Quebec. Alain is a member of the Société Géologique de France, of the Society of Economic Geologists and of the Society for Geology Applied to Mineral Deposits. Alain has been associate editor of Mineralium Deposita from 2001 to 2005.

Mathieu Roskosz is an experimental petrologist specialised in the physical chemistry of geomaterials. His research has implications for magmatic environments and astrophysics. He has particular interest for the kinetics of phase transformations and the evolution of mineral systems from initial disequilibrium to equilibrium. Mathieu has studied nucleation and out-of-equilibrium phase transitions in supercooled silicates, as well as diffusive processes in molten silicates and their redox state. Another application of his work involves isotopic fractionation processes and the kinetics of isotopic equilibration.

The research of Delphine Charpentier is focussed on geochemical and mineralogical transformations during interactions between sedimentary rocks and fluids. Delphine has special interest for processes involving clay minerals, such as mass transfer and mineralogical reactions in fault zones and redox changes in iron-rich systems. Her approach combines high-resolution mineralogical studies and geochemical modelling techniques.

Valérie Chavagnac received a PhD in geochemistry in 1998 from the University of Bern (CH) and the University of Rennes 1 (FR), where she studied the behavior of the Sm-Nd isotope system during metamorphism. During her stay at MIT (USA), she continued working on the geochemical composition of archean rocks, more precisely the komatiites of the Barberton Greenstone Belt. She moved to the National Oceanographic Centre, Southampton (UK) in 2000 and changed her research activity to oceanic hydrothermal activity. Since 2007, she has been a CNRS researcher at the Laboratoire des Mécanismes et Transferts en Géologie in Toulouse. Her research interests are the chemical composition of hydrothermal fluids, especially those rich in hydrocarbon and hydrogen.

Stéphanie DUCHENE is a professor at Paul Sabatier University in Toulouse (France). Her research focuses on the determination of the kinetics of magmatic and metamorphic processes by radiochronology (Sm-Nd and Lu-hf in metamorphic garnet rocks), geovelocimetry (modelling of element diffusion in minerals) and analysis of crystal size distributions (plagioclase in basalt).

After a background in matter and radiation physics, Denis Testemale did his thesis at the Laboratory of Crystallography (CNRS, Genoble) on the structural description of supercritical aqueous solutions (molecular interactions, hydrogen bonding, ion pairing) using X-ray absorption and diffusion techniques. He continued these studies as part of his post-doctorates at ESRF and Adelaide University (Australia), and today, he focuses his studies on the transport of metals in hydrothermal fluids, using methods that take advantage of synchrotron radiation. He combines this research activity with the reception of users on the X FAME (INSU national instrument) absorption line at the ESRF.

Professor, University of Marnes-la-vallée, Director of a component of Marne-la-vallée University: the IFG (Francilian Institute of Geosciences). My interests always converge on the material vibrational spectroscopy of geological interest and the behaviour of materials (in a broad sense) for the storage of waste (nuclear or household).