Julie Cosmidis and Estelle Couradeau (phD students at the Institut de Minéralogie et de Physique des Milieux Condensés, Paris) received a grant from the SFMC in order to attend to the International school “Minerals and Biosphere”.
This school organized in Campiglia Marittima (Italia), 27-30 September 2011, was dedicated to young scientists from various scientific fields such as microbiology, mineralogy and geochemistry. The school took place in an ancient mining site now covered by pines and olive trees and gathered around 20 European phD students and postdocs.
The aim was to illustrate the diversity of scientific questions that deal both with minerals and living organisms/organic matter, and how they can be addressed. Thus, there were lectures on techniques used for investigating microbe-minerals interfaces, allowing the preservation of living structures and a (at least) micrometer scale observation resolution. There were also fundamental topics such as the selection by organics of the mineral growth orientation. A panel of applications from the remediation of polluted soils by plants and fungi to the consequences of mineral dust on human health was also presented. 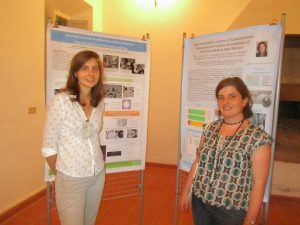