Welcome to the SFMC registration page of the International field workshop “Geology of the Variscan belt in the Eastern French Massif Central: Granites, Nappes and Migmatites: anatomy of a collapsing orogen (June 22-27, 2018)

The number of participants is limited. If you are interested to participate, we recommend you to register as early as possible. The registration form is available below.

Overnight and dinner in a country inn in Pilat hills

Overnight and dinner at Mas de la Barque, near Villefort

Overnight and dinner in hotel in Cévennes mountains

Participants must make their own arrangements into Saint-Etienne on the 21st of June. Saint-Etienne is connected by frequent local trains to Lyon, which has a train (TGV) station and an airport (Lyon Saint- Exupéry, LYS). For participants to EMPG meeting in Clermont, we can arrange (at cost) collective transport on the 21st from Clermont-Ferrand to Saint-Etienne (a 1h30 drive).

The excursion will end up on the evening of the 26th in the Cévennes mountains ca. 1 hour North of Alès, Southern France. Participants willing to organize own transport may leave from there on the 26th late (no public transport to speak of). The excursion will return to Saint-Etienne on the Wednesday 27th, driving in the Rhône Valley to Lyon and Saint-Etienne, so participants can organize transport out of Alès station station in the mid-morning, Valence TGV around noon or Lyon station or Lyon Saint-Exupéry airport early afternoon.

Climate in early summer in the Massif Central is normally warm, in the high-20s, with cool nights. However, bear in mind that large portions of the region are above 1000 m altitude; an occasional thunderstorm or cold spell can happen all year round, so be prepared for the possibility of one or two cold and wet days. If the weather is hot, don’t forget a swimming costume (some outcrops are located on beautiful swimming holes along streams and rivers and some resorts have a swimming pool).

Most outcrops are located on the road side, or within a few hundreds of meters from the road. Light hiking boots/sport shoes are sufficient. Some spectacular exposures are in (fairly rugged) river/stream beds, so the less nimble participants may want to consider walking sticks or similar. 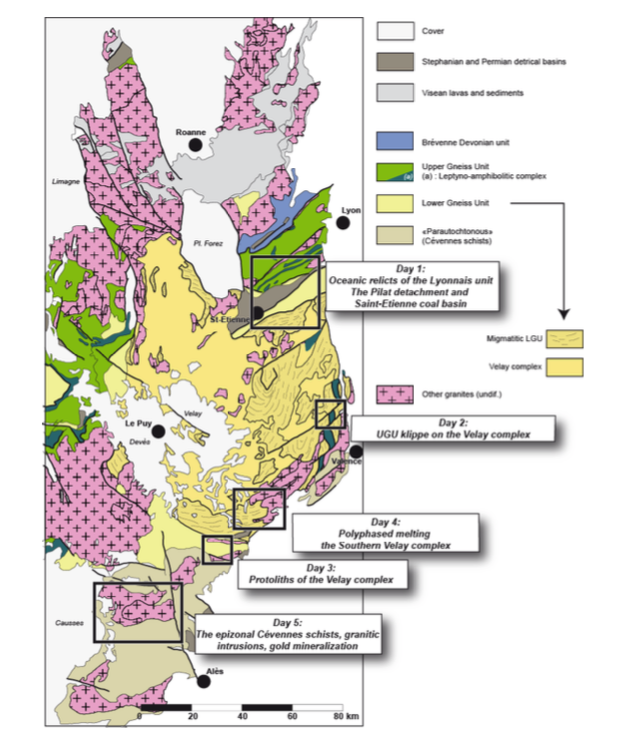 The registration period is closed